Tested and proven: Honeywell PIE software reads and writes do not affect a UDC controller’s output

A customer has several UDC 3200 loop controllers with newly added Ethernet cards.   He needed to configure each of the controllers’ IP addresses using Honeywell Process Instrument Explorer (PIE) software.  Because the controllers are working in a 24×7 continuous process, he was concerned about how making those changes would affect each controller’s performance.

So he asked me:  Would a PIE action of uploading config files from or downloading them back to a controller affect the controller’s performance?

In the past, I’d only ever changed a controller’s IP address when it was on my workbench, not when it was actively controlling a process. So I’d never paid attention to whether PIE communications would affect the controller’s output or its PID action. Since I couldn’t answer the question, I told the customer I’d run a test to find out for sure.

Step 1: Simulate a Process and Record the Data

I connected a UDC 3200’s output (a 1-5 VDC voltage drop across a 250 ohm resistor in the output loop) to an analog input on a Honeywell paperless recorder.  The recorder was set up to sample at 10Hz and run the fastest chart speed, 6000mm/hr.  At that chart speed, the time divisions are marked every 10 seconds and the entire time axis is only a minute and 15 seconds.

The UDC 3200 samples and makes a PID decision six times per second, so a 10x/second sampling rate should pick up any hiccups on the output. The controller’s output was absolutely stable at 13.6%.   The chart showed a perfectly straight line. 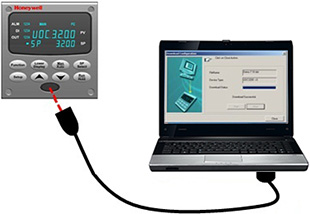 I used an infrared adapter to communicate from PIE software to the IR port on the front of the controller.

I first uploaded the entire configuration and the output’s straight line on the graph didn’t make a twitch.

Next, I made an ‘on-line’ change to write just a new IP address and saw no deviation at all on the output.

Then I downloaded the entire configuration to the UDC and no change occurred at all on the output signal.

This entry was posted on June 28, 2012, 3:35 pm and is filed under Batch Control, Communications, Configuration, Ethernet, Honeywell, Installation, Loop Controllers, Service, Software. You can follow any responses to this entry through RSS 2.0. You can leave a response, or trackback from your own site.